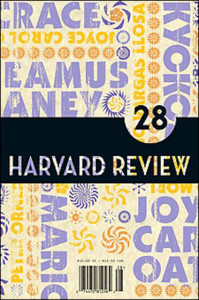 Last year, I undertook a kind of literary experiment that today—one year later—I look back upon as a fascinating failure. My goal had been to write without constraint, but instead I created a multiplicity of constraints. And yet, in the process, I learned a great deal about just what, precisely, it means to be a “woman writer.”

I was teaching at the time, finishing a novel, caring for my two-year-old son, and suffering from a lingering illness that several doctors could not diagnose. This illness seemed to include my body without being exclusive to it: it was all I could do to get out of bed in the morning and drag myself to work. Something was clearly wrong, but the precise location of this “wrongness” eluded everyone’s understanding, especially my own. All I can say is that it felt as if my place in the world—that fragile border between myself and it—had been given a fatal jolt.

Part of the mystery revealed itself (as such things often do) in an unbidden moment. I was standing in the kitchen making dinner, thinking about the fact that soon my husband would be returning to work after a two-year leave, taking many hours of childcare with him. I was wondering what I could give up in order to survive the change—job, book, or child—aware that none of the options was really feasible.

A strange thing happened as I allowed myself to imagine flinging off my responsibilities in turn: I began to feel light, almost weightless. And then—I seem to recall that I was dishing peas into my son’s plastic bowl—the word came to me: time. Something was wrong with my relation to time. Not just my body’s as it moved—or rather dragged—through the day, but my mind’s, pushing through its own space. In this latter regard my relation to time was so far askew that it actually seemed comical.

Here I was, cranking out the last chapters of an epic-length novel (the irony of whose working title, The History of an Illness, does not escape me now), pretending to have the leisured life of Count Leo Tolstoy. He had a wife to copy out his revisions; wheat fields to gaze upon; servants to cook and clean for him. My daily existence, on the other hand, bore more resemblance to the coal miners of a D.H. Lawrence novel: I dug my way in fits and jolts, working against the clock, in dark and foulest air.

But more than my working conditions themselves, it was the effort of sustaining these twin illusions—personal luxury and narrative scope—that had actually made me sick. At thirty-three, I just didn’t have the strength to pretend anymore.

I don’t know what other writers feel about this intimate and always frustrating relationship to time. I doubt I am the first writer, man or woman, ever to have had to juggle several responsibilities at once. But I am almost certain that women, and especially women with children, experience this juggling act in a different and possibly more devastating way.

Sixty-five years ago, in her essay A Room of One’s Own, Virginia Woolf suggested that in the future women would need to conform their bodies to the reality of their time: “The book has somehow to be adapted to the body,” she writes, “and at a venture one would say that women’s books should be shorter, more concentrated, than those of men, and framed so that they do not need long hours of steady and uninterrupted work. For interruptions there will always be.”

Comparing a passage of Charlotte Bronte’s Jane Eyre to Jane Austen’s Pride and Prejudice, Woolf remarks, “The woman who wrote those pages had more genius in her than Jane Austen; but if one reads them over and marks that jerk in them, that indignation, one sees that she4 will never get her genius expressed whole and entire. Her books will be deformed and twisted. She will write in a rage where she should write calmly. She will write foolishly where she should write wisely.”

Charlotte Bronte died young, “at war with her lot,” her work ultimately “cramped and twisted.” If women of the future were not to suffer the same fate, Woolf suggests, they would need to find the time and privacy in which to express their genius “whole and entire,” their minds having “consumed all impediments and become incandescent.”

It occurred to me as I dished those peas into my son’s bowl, that my mind was not exactly incandescent. And then, I received something approaching a lucid thought: What if I stopped pretending? If IK wrote in the time I possessed and stopped at the first interruption, without returning later to smooth things over?

Such a notion had—perhaps not in any cosmic scheme, but for me—revolutionary implications. Endings would be the first thing to go, a luxury I could no longer afford. Gone, too, would be those nice round narrative shapes I had aspired to. But at least time would no longer be able to do its dirty work invisibly: at least I could unmask him for the iron intruder he was, thereby liberating myself from the complicity that had nearly done me in.

For six seeks I wrote this way—freely, stopping at every interruption. For six weeks, time and I collaborated, I the steady barge and he the lock in the canal, siphoning off my excesses with masterful delicacy. For those weeks, time was no longer my enemy but my punctuation. Never, while writing, had I felt my own pulse beat as steadily, as free from fear. Never had I felt more bristling with ideas or focused, the way I always imagined male writers to feel when writing.

The result, alas, was not great literature. It was not even literature, exactly, but rather fragments and notes and many ideas: for literature I would have needed several hours on end like that, not just half an hour or even an hour. On top of which, toward the end of the six weeks a funny thing happened: the experiment died.

In part, its death was due to natural and even fortuitous causes: at a rate I had never even considered possible before, I had engendered ideas for stories that now called upon me to finish them. Having been born part-way, they now refused to settle for just an arm here, a leg there. At a certain point, I discovered, narratives begin to make their own demands. The other reasons for its failure is, perhaps, more discouraging. It has to do with what Virginia Woolf meant by a mind that has consumed all impediments and “become incandescent.” Time, I discovered, is not a writer’s only impediment: so is space. One needs not just inviolate time, but an inviolate place as well. This I lost over those six weeks, if ever indeed I had it at all.

Someone once said that architecture was frozen music. If I could extend that remarkable image, I would say that space is frozen time. But that space in the mind is a delicate thing, easily crushed by the slightest wind. By the time I realized this, the delicate space I had constructed in my mind was gone, overwhelmed by a number of mundane but momentarily all-consuming intrusions from my professional life. Writing, I decided then, shared something with the field of medicine. To be a writer was to be perpetually on call. Except that for a writer the patient is oneself, and the illness doesn’t ever go away.

My experiment eventually gave rise to a number of stories. Somehow, in bits and pieces over a year’s time, the word did get done. By “done,” of course, I mean the old, familiar world of illusion-making. I regret only that I did not have the talent for creating anything new, a form that might put an end to the conventional narrative’s demands while preserving its emotional core. I hope other women writers will find such forms, because until then I think we will continue to be more exhausted than just about any laborer on earth.

I have little doubt that, had Virginia Woolf read the fruits of my experiment, she would have pronounced upon them much as she did upon the unfortunate Mary Carmichael: “Give her another hundred years,” Woolf concludes, “give her a room of her own and five hundred a year, let her speak her mind and leave out half that she now puts in, and she will write a better book one of these days.” I have a room of my own and money. But these are not enough: one needs an entire house. And not just a house made of wood but a whole house-place. And not just a house-place but a house in the soul: replete with beams and windows and doors, and made of pure, weightless light.